A couple of years ago I found online a script to merge several .asc grids into a single file in R.
I do not remember where I found it but if you have the same problem, the script is the following:


It is a simple and yet very affective script.
To use this script you need to put all the .asc grids into the working directory, the script will take all the file with extension .asc in the folder, turn them into raster layers and then merge them together and save the combined file.

NOTE:
if there are other file with ".asc" in their name, the function

will consider them and it may create errors later on. For example, if you are using ArcGIS to visualize your file, it will create pyramids files that will have the same exact name of the ASCII grid and another extension.
I need to delete these file and keep only the original .asc for this script and the following to work properly.

A problem I found with this script is that if the raster grids are not properly aligned it will not work.
The function merge from the raster package has a work around for this eventuality; using the option tolerance, it is possible to merge two grids that are not aligned.
This morning, for example, I had to merge several ASCII grids in order to form the DTM shown below: 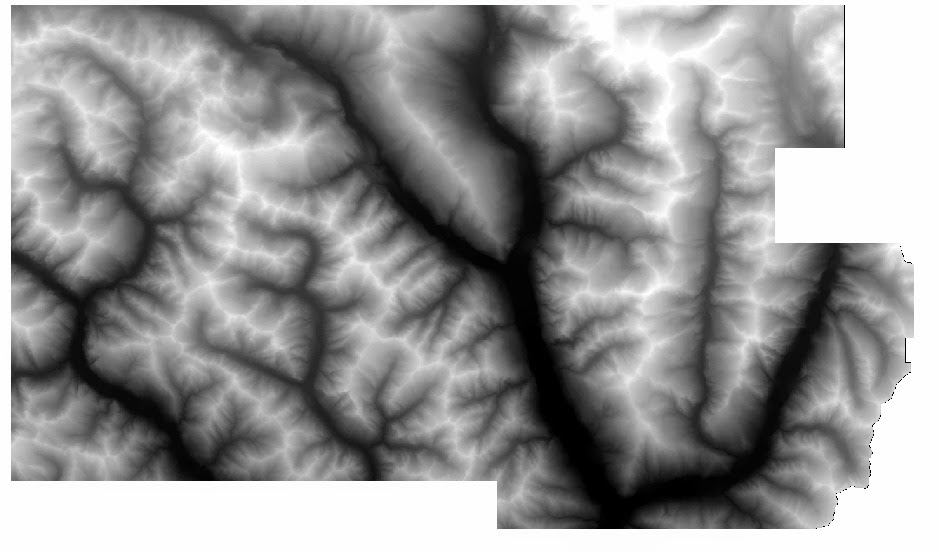 The standard script will not work in this case, so I created a loop to use the tolerance option.
This is the whole script to use in with non-aligned grids:


The loop merge the first ASCII grid with all the other iteratively, re-saving the first grid with the newly created one. This way I was able to create the DTM in the image above.
Posted by Fabio Veronesi at 11:34 1 comment: